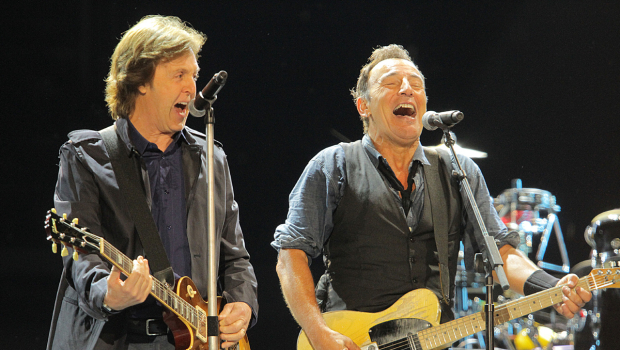 Paul McCartney‘s summer tour took him to New York’s Madison Square Garden last night where, during the encore, he was joined by Bruce Springsteen and Steven Van Zandt. You can check out footage of it above.

They performed “I Saw Her Standing There” and following its conclusion, McCartney called for it to be played again. Van Zandt took the solo on the first go-round, while McCartney’s lead guitarist, Rusty Anderson, did the honors on the second.

“Rockin’ out with The Boss–Sounded so good we had to do it twice!” McCartney posted on Instagram.

Springsteen and McCartney, who have a combined age of 143, have a unique history playing the Beatles song that begins, “Well, she was just 17.” Back in 2012, McCartney sat in at Springsteen’s concert in Hyde Park for it and “Twist and Shout,” a night which also made headlines when, towards the end of the latter, the sound was cut off by authorities due to the fact that the show broke curfew.