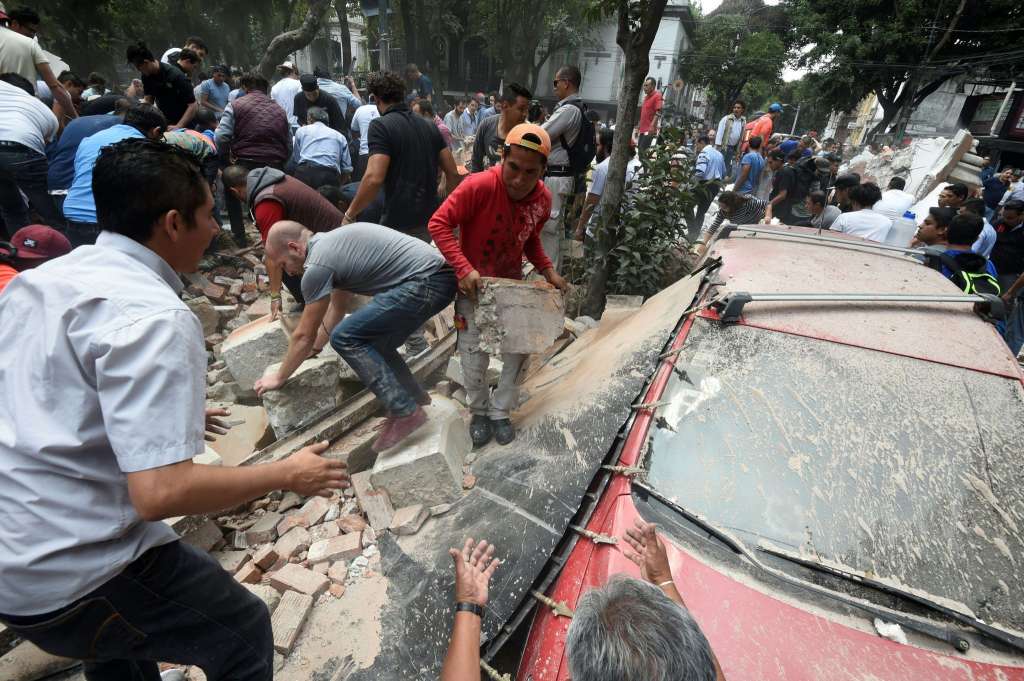 Mexican media broadcast images of multiple downed buildings in densely populated parts of Mexico City and nearby Cuernavaca. A column of smoke rose from a structure in one central neighborhood in the capital.

Dramatic video showed one mid-rise building collapsing into a cloud of dust amid cries from onlookers. It was not clear whether anyone was inside, but Mayor Miguel Angel Mancera reported that there were people trapped in some buildings.

Gov. Alfredo del Mazo told the Televisa news network that two people died in the State of Mexico, which surrounds the capital: a quarry worker who was killed when the quake unleashed a rockslide and another person who was hit by a falling lamppost.

The quake caused buildings to sway sickeningly in Mexico City and sent panicked office workers streaming into the streets, but the full extent of the damage was not yet clear. There were no immediate reports of deaths.

The U.S. Geological Survey calculated its magnitude at 7.1 and said it was centered near the Puebla state town of Raboso, about 76 miles (123 kilometers) southeast of Mexico City.

Puebla Gov. Tony Gali tweeted that there had been damaged buildings in the city of Cholula including collapsed church steeples.

In Mexico City, thousands of people fled office buildings and hugged to calm each other along the central Reforma Avenue as alarms blared, and traffic stopped around the Angel of Independence monument.

Earlier in the day workplaces across the city held readiness drills on the anniversary of the 1985 quake, a magnitude 8.1 shake, which killed thousands of people and devastated large parts of Mexico City.

In the Roma neighborhood, which was hit hard by the 1985 quake, piles of stucco and brick fallen from building facades littered the streets. At least one large parking structure collapsed. Two men calmed a woman seated on a stool in the street, blood trickling form a small wound on her knee.
At a nearby market, a worker in a hardhat walked around the outside warning people not to smoke as a smell of gas filled the air.

Market stall vendor Edith Lopez, 25, said she was in a taxi a few blocks away when the quake struck. She said she saw glass bursting out of the windows of some buildings. She was anxiously trying to locate her children, whom she had left in the care of her disabled mother.

Pictures fell from office building walls, objects were shaken off of flat surfaces and computer monitors toppled over. Some people dove for cover under desks. Local media broadcast video of whitecap waves churning the city’s normally placid canals of Xochimilco as boats bobbed up and down.
Mexico City’s international airport suspended operations and was checking facilities for any damage.

Much of Mexico City is built on former lakebed, and the soil is known to amplify the effects of earthquakes even hundreds of miles away.
The magnitude 8.1 quake that hit Sept. 7 of Mexico’s southern coast was also felt strongly in the capital.