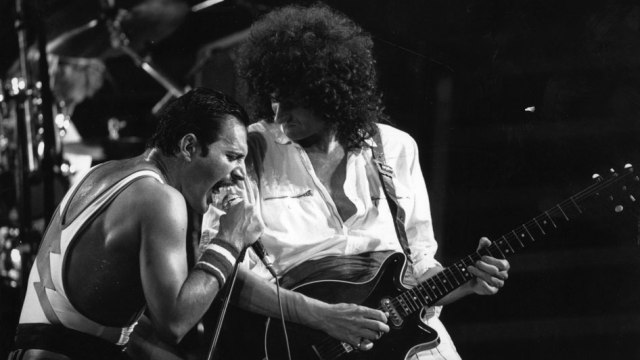 Classic rock legends Queen are set to look back at one of the band’s definitive albums.

Released in 1977, Queen’s News of the World was a worldwide smash, boasting timeless hits including “We Will Rock You” and “We Are the Champions.” It went on to be the band’s best-selling album to date.

The fully loaded 40th-anniversary deluxe box set reissue includes the original album on CD, plus two more discs of recently unearthed out-takes and rarities from the band’s archives, one of which is a newly created ‘alternative’ version of the whole album – Raw Sessions.

“For many Queen devotees, this Raw Sessions CD will be the most intriguing component of the new release,” according to a press statement. “Mined deep from long-vaulted studio multi-track tapes, this extraordinary parallel album brings to light never-before-heard alternative versions of each of the album’s 11 tracks. Every lead vocal is different, as are most of the lead guitar parts and a great many other instrumental details.”

The Raw Sessions disc will also include a version of “All Dead, All Dead,” featuring Freddie Mercury on lead vocals (the album version features guitarist Brian May singing lead).

Among the bonus tracks found in the box set include the band’s entire five-song final live session recorded for BBC Radio in October 1977, seven live performances of NOTW songs, and the unreleased song, “Feelings Feelings,” recorded during NOTW sessions.

Along with a “pure analog” re-cut of the original vinyl LP, the package will boast with a brand new one-hour DVD documentary, Queen: The American Dream, created from backstage material filmed during Queen’s 1977 USA News of the World tour.

Rounded out with a host of band memorabilia (including three posters and a 60-page book of images), this new version of the band’s most popular album looks to be an essential addition to any hardcore Queen fans’ collections.

The deluxe edition is due for release on Nov. 17, and is available for pre-order here.