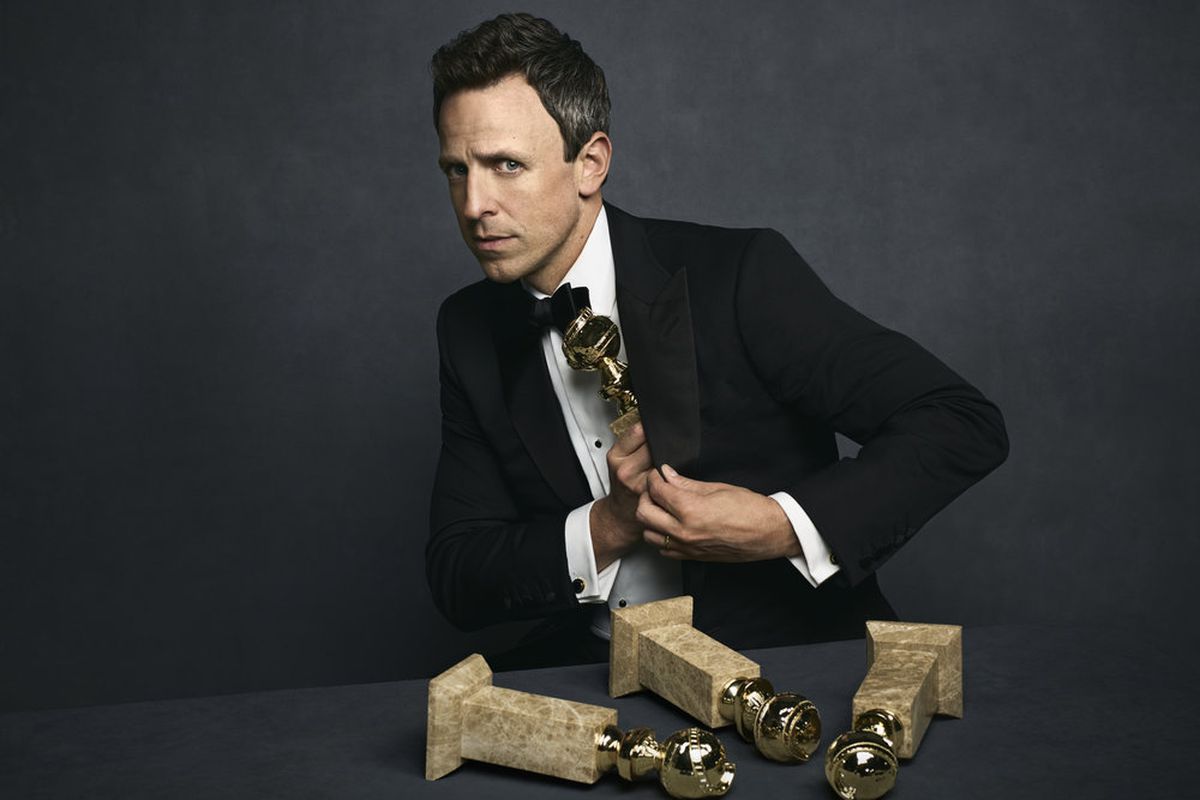 1. The biggest winners were “Big Little Lies” and the movie “Three Billboards Outside Ebbing, Missouri”, which both scored four awards.

2. The movies “Lady Bird” and “The Shape of Water”, and the TV shows “The Handmaid’s Tale” and “The Marvelous Mrs. Maisel”, won the next most . . . all of them won TWO awards apiece.

3. Seth Meyers was the host, and he had the difficult job of tackling the sexual harassment elephant in the room . . . WHILE trying to be funny. He opened with this line: “Welcome, ladies and remaining gentlemen . . . it’s 2018, marijuana is finally allowed, and sexual harassment finally isn’t. It’s gonna be a good year!”

Some of his other best jokes were: Quote, “Three words that could not be better designed to infuriate our president [are] ‘Hollywood Foreign Press Association.’ The only name that could make him angrier is the ‘Hillary Mexico Salad Association.'”

Seth had ONE joke that no one knew how to react to. It was when he joked about Harvey Weinstein’s future death. He said, quote, “Harvey Weinstein isn’t here tonight because, well, I’ve heard rumors that he’s crazy and difficult to work with.

“Don’t worry, he’ll be back in 20 years when he’s the first person ever booed during the In Memoriam.” That drew some gasps, and Seth added, “It’ll sound like that.” (For what it’s worth Harvey is 65, so Seth is having him die at 85.)

5. As for Oprah, she delivered a very powerful acceptance speech when she became the first black woman to ever receive the Cecil B. DeMille Award. It was about nine minutes long, and it touched on everything from race to gender inequality to justice. She got a couple standing ovations. (Here’s the full speech.)

6. Barbra Streisand presented the Best Dramatic Movie award . . . and noted that SHE was the only woman to win a Best Director Golden Globe.

7. Speeches aside, there weren’t many surprising moments . . . and unlike the Oscars, all the correct winners were announced. But a lot of them were expected.

(For example, our story from Friday predicted 19 of the 25 winners.)

If anything, the hyped movie “Call Me By Your Name” was a “snub.” It was shut out, and so was the Steven Spielberg movie “The Post” . . . even though it features Meryl Streep, AND there was a joke in Seth’s monologue about how it was probably going to win everything. (It’s at the five-minute mark, here.)

8. Frances McDormand’s speech was strangely bleeped on the live broadcast. The trigger-happy censor bleeped her saying “Fox Searchlight” and “tectonic shift.” (???) Maybe they were expecting Frances to curse a lot?

But she did. She got the S-word past the censors, but that was AFTER they bleeped “Fox.”

(For what it’s worth, she said the alternate pronunciation of the S-word that adds an ‘E’ at the end. So, it was the sort of softer version. Here’s the UN-BLEEPED version.)

9. When James Franco won Best Comedic Actor for “The Disaster Artist”, he brought the real life disaster artist Tommy Wiseau onto the stage. But he blocked Tommy when he went to grab the mic. (Here’s video.)

10. Oh, and Tonya Harding was there. Of course, she was there with the people from the movie “I, Tonya” . . . but it was still weird to see the face-time Tonya got when Allison Janney won for portraying her mom in the movie. (Here’s video.)